#thepriceoftheword is the information campaign that started on September 16, 2020. It aims at recollecting the value of independence in journalism.

The organisers are referring to the civil society reminding about the importance of truth. They also emphasise how risky is the spreading of “uncomfortable” information in the name of the public good.

«We encourage everyone to share their stories using #thepriceoftheword hashtag. That shows how truth is vital for civil society’s development and safety, democracy, human rights, and state. Joining #thepriceoftheword campaign, you choose truth. The true word has its price, and sometimes it’s way too high», the organisers say.

In terms of the campaign, the discussion “The price of the word. About the mission of a journalist in the fight for truth” was held at 27 Lviv International BookForum. Myroslava Gongadze, Zurab Alasania, and Vakhtang Kipiani, moderated by Igor Balynskyy, discussed the price of truth, the importance of media community unity, and a personal choice to go against the system.

Myroslava Gongadze, a journalist and a chief of Voice of America Ukrainian Service: “It’s hard to say why the journalist decides to tell the truth, risking the life, in times when everyone else is silent. It has to do with psychology, with a personal choice to be in the enchanting, active, interesting, exciting, but highly challenging profession. Those who can not live without cognising the world and sharing it with others are the real journalists”.

One can follow the campaign #thepriceoftheword at priceofword.com. There are gathered all the campaign materials and quotes of those who have already joined the initiative. 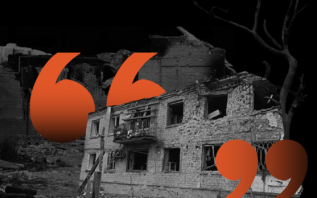